THE LEAP OF A JUMP

Courtesy: The artist and Chattevjee and Lal, Mumba

Courtesy: The artist and Chattevjee and Lal, Mumbai

Hetain Patel’s The Jump Parts 1 &2 2015 is a two-channel HD video installation that has an accompanying sound track by Amy May. Both parts each run for 6 minutes and 32 seconds. Patel’s installation is split, with Part 1 and Part 2 playing synchronously on loop on large screens that have been installed back to back (Figure 3).

Upon entry, the viewer is faced with Part 1, and the instantaneous recognition of the comic book hero Spiderman, whose recognisable jumping position dominates the visual field. The image is picturesque, clear, crisp, colourful, and almost still. The background is void with dream like smoke, focusing the viewer’s attention on Spiderman, as he hovers through each motion of the Spiderman-esk jump and landing. The hyper slow motion image is accompanied by theatrical orchestral sounds that fill the viewer’s sound world. The sound and image combine to build a heroic tension, and climax on Spiderman’s Hollywood ‘heroic look’ toward the camera. Credits roll.

Part two’s scene is domestic, and filled with the pulsating colours of traditional Indian attire as a family sits as though awaiting a family portrait. A ‘pull back reveal shot’ exposes Spiderman crouched on the couch, poised to jump. Spiderman again leaps picturesquely slow in front of the family, whose eyes follow the arch of his jump to the landing point in the middle of the living room. A poised Spiderman throws a ‘hero look’ back at the family, and with the music synchronised as per Part 1, the installation builds and climaxes at this point. Credits roll.

Patel’s beautifully shot re-imagining, The Jump, highlights the personal importance of his leap out of his ancestral culture and into a new western contemporary culture. The Jump uses the formal elements of time, sound, subject matter and style to highlight Patel’s signifying leap into a new cultural context. Time elongation and sound are used in tandem, and are the two key formal elements that Patel uses to emphasise the importance of this depicted moment. A high-speed camera has captured approximately 1.5 seconds of Patel’s jump. The Jump comprises a minimum of 21600 frames displayed at 60 frames per second, and this elongation of time makes the viewer experience and examine every minuscule moment. The orchestral sound is used to support and emphasise the importance of this leap. The Soundtrack is composed of orchestral instruments that build and heighten tension to emphasise the importance of the moment. This technique is reminiscent of Hollywood’s modern cinema blockbuster style, which uses slow motion and sound tracks with theatrical builds to “creat[e] an epic feel to the work” [1], and denote the importance of key events (commonly a death or an action scene).

The installation of Patel’s work is reminiscent of western cinemas, and ends correspondingly with the rolling of credits. The work intentionally develops this cultural familiarity so as to contextualise its content, as it presents a ‘bilingual’ perspective on the fantastical world of Hollywood style and western culture by juxtaposing it with the domestic setting of his culturally British Indian family. Spiderman’s leap is the consistent subject matter between Part 1 and Part 2, and Patel has used this Hollywood culture fantasy to signify his personal ‘leap’, cross culturally, into a new context that he embraced, for its ability to provide childhood anonymity. Patel uses time, sound, style and subject matter in this installation to highlight the leap into a new cultural context.

Patel’s personal historical context informs The Jump as it plays hand in hand to expose the ‘leap’ into a personally new culture, and represents his personal experience and artistic development through a pastiche of western contemporary culture. This leap is also understood to be a leap into the contemporary, as the hand-made Spiderman costume in Patel’s installation is indicative of the style of 2010’s Hollywood movie series, and not the comic book or animated costuming of the previous decades. The Jump was filmed at Patel’s grandmother’s house in Bolton, UK, as it is the embodiment of his Indian cultural heart, where he first leapt off his grandmother’s couch into a new culture and discovered a fantastical world. This fantasy world and new culture influenced the future of Patel’s artistic style, as it provided child hood Patel with freedom from racial recognition and vilification that has continued to plague the UK[2]. This is further explained through Patel’s statement, “I am interested in connecting marginalized identities with the mainstream in an effort to destabilize notions of authenticity and promote personal freedom”(Forrest 2016)[3]. Patel has used The Jump and it’s setting to express his past and define his motives for his focus on connecting cultures in a pursuit for personal freedom. His metaphorical jump emphasises his personal and historical context, and highlights the significance and importance that Patel places on his personal endeavour into new culture, as demonstrated in The Jump.

The Jump uses symbolism to aid in portraying the importance that Patel places on his emersion into western contemporary culture. The title The Jump is the first signifier of symbolism to represent the ‘leap’ or embracement of a new culture. Patel uses the Spiderman-esk jump to visually tie the two videos together part 2 representing his ancestral cultural heart and part 1 representing the western contemporary culture. The order of presentation, Part 1 then Part 2, works to deliver to the viewer the direction of movement through time. The organisation of this installation highlights to the viewer Patel’s emersion into western culture, and the setting of his ancestral roots symbolical behind him. 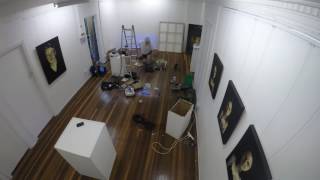